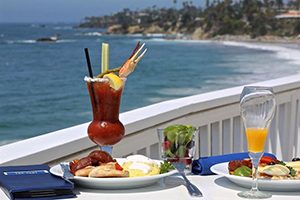 Last month, Friends of Volunteer Network OC spent the morning helping homeless men and women in Laguna Beach. We handed out Bombas socks, lunch bags, blankets and face masks, and we spent time talking to many of the individuals living on the streets of Laguna. After it was over, Cheryl and I went to The Cliff Restaurant for lunch. A half hour into our lunch, one of the homeless men we met earlier walked into the dining area. His clothes were tattered and dirty, but he wore a brand new, bright red face mask. It was quite the contrast. When I saw him, I wondered how this would play out. Would the restaurant call the police or try to escort him from the premises? To my surprise, the waiters and waitresses did nothing. After a few minutes he asked a waitress for a cup of water to go. She gladly obliged and he left the restaurant.

A week later, I was parked outside Bruegger’s Bagels near John Wayne Airport. A homeless man with matted hair and old, extremely worn clothes opened the door and went into the restaurant. Again, I wondered what would happen. I went inside. The homeless man was in line, so I moved up behind him. He stood there looking around and talking alphabet soup, but when it was his turn to order, the server called him by name and asked what she could get him. He asked for a bagel and coffee. She gave it to him without charge and he went on his way.

I applaud the employees at The Cliff Restaurant in Laguna Beach and Bruegger’s Bagels in Newport Beach for showing a little understanding and compassion for two men who are down on their luck. They made a difference. If you would also like to make a difference, please download our mobile app and sign up to volunteer today!

About the Author: Bill Cates