Panhandlers – Should or Shouldn’t We Help Them

Part I of II – If it had ketchup, it would be perfect! 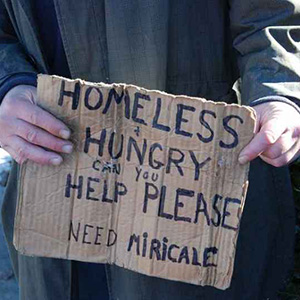 A few years ago, I was standing in line outside the Stanley Mosk Courthouse in Los Angeles.   As I stood there, I noticed a man walking up and down the line begging for money. He was holding a handwritten sign on torn cardboard. It said, “I have AIDS, please help me.”

The man was obviously homeless. He had tattered clothes, missing top teeth and holes in his brown cotton gloves. His face was thin and worn. It was difficult to tell his age, but I would guess he was between 45 and 60 years old.

As a rule, I don’t give money to strangers because it is uncertain whether the money will help them or hurt them. Will the money be used for food and shelter or something destructive, such as alcohol and drugs? Instead, I give to charities established to help those who are less fortunate in our community. I said a prayer for him.

The man walked by me a few times and politely asked for money. Several people reached into their pockets to give him change. Most looked away. One lady gave the man money and then said to him, “I know this breakfast burrito is half-eaten, but it is yours if you would like to have it.” The man gratefully took the half-eaten burrito and continued to walk up and down the line.

After a few laps, the man stopped and took a bite of the burrito. He closed his eyes and smiled gently. He looked satisfied. He opened his eyes and once again began to walk; then he said, “If it had ketchup, it would be perfect!”

At first I chuckled, but then I thought about it. Wow! Is it that simple? All he needs is a little ketchup and he would be content? How can anything be perfect for this poor man? He has nothing, yet he sincerely appreciated the half-eaten burrito.

So the question is: should or shouldn’t we give money to panhandlers? I will delve into that complicated question next week in part II of this article.

About the Author: Bill Cates